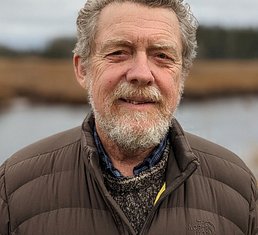 Harry Thurston has travelled the globe writing articles for more than thirty publications, including National Geographic, Audubon, Equinox, Canadian Geographic, and International Wildlife. Thurston’s career as a journalist was highlighted by the 1983 National Magazine Award for Science &amp; Technology and the 1986 and 1987 Canadian Science Writer’s Association’s Science &amp; Society Award.

He is the author of 25 books of poetry and natural history, many of which are award winners. Tidal Life: A Natural History of the Bay of Fundy, received all three major nonfiction prizes in the Atlantic region, and A Place between the Tides: A Naturalist’s Reflections on the Salt Marsh (his eco-autobiography), was winner of the Sigurd Olson Nature Writing Award in the United States. The Atlantic Coast, co-published by the David Suzuki Foundation, won the Lane Anderson Award for Best Science Writing in Canada, and the City of Dartmouth and the Evelyn Richardson Awards. Recent works include Icarus, Falling of Birds, a long eco-poem with photography by Thaddeus Holownia and Lost River: The Waters of Remembrance, a Memoir. He served as a contributing editor to Equinox magazine for two decades. He also edited The Sea’s Voice: An Anthology of Atlantic Canadian Nature Writing (2005) and established himself on the Atlantic-Canadian literary scene as editor and publisher of the literary journal Germination.

He received honorary doctorates from Acadia University in 2013 and St. Thomas University in 2021 and was the 2015 Chair of the Writers’ Union of Canada. He is currently a Mentor for the Master of Fine Arts Program in Creative Nonfiction for University of Kings College in Halifax.

A biologist and naturalist, he is among Canada’s best-known nature writers. He lives with Cathy Thurston in Tidnish, Cumberland County, Nova Scotia.

The following books are available at the Gallery or through  harry@harrythurston.ca

A Place Between the Tides: A Naturalist’s Reflections on the Salt Marsh, winner of  the 2005 Sigurd Olson Nature Writing Award in the USA and finalist for the British Columbia Award for Canadian Non-Fiction and for the Drainie-Taylor Biography Prize

A Ship Portrait, a novella in verse, which was adapted as a stage play for the Ships Company Theatre and was a finalist for the Atlantic Poetry Prize.

Animals of My Own Kind, poetry

Building the Bridge to PEI, with photographs by Wayne Barrett & Anne MacKay

Dawning of the Dinosaurs

If Men Lived on Earth, poetry

Island of the Blessed /Secrets of the Sands (US edition), winner of the Evelyn Richardson Literary Award

Keeping Watch at the End of the World, poetry, Alcuin award for Book Design

Ova Aves, with photographs by Thaddeus Holownia, a finalist for the National Magazine Award for Poetry

The Nature of Shorebirds, winner of the Evelyn Richardson Literary Award

The Sea Among the Rocks

The Atlantic Coast, winner of the Lane Anderson Award for Best Science Writing in Canada, the Dartmouth Nonfiction and the Evelyn Richardson awards.